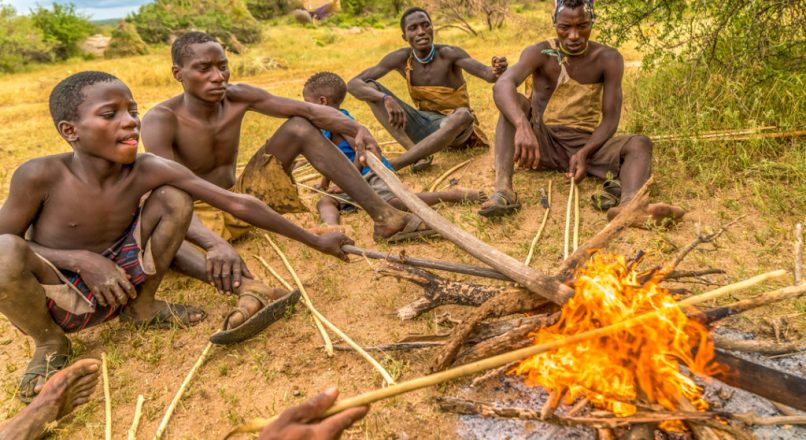 The Hadzabe Tribe: Hadza people. The Hadza, or Hadzabe, are an indigenous ethnic group in north-central Tanzania, living around Lake Eyasi in the central Rift Valley and in the neighboring Serengeti Plateau.

The Hadzabe people are an indigenous ethnic group living around Lake Eyasi, in the southern part of the Ngorongoro Conservation Area. There are estimated to only be around 1000  Hadzabe people living in Tanzania. This ethnic tribe are descendants of Tanzania’s aboriginal hunter gatherer populations, and still to this day rely on the land and their surroundings for survival.

The Hadzabe way of life has changed very little. For thousands of years these people have been full-time hunter-gatherers and this makes them the last of their kind in Africa. This tribe is not closely linked to any other by language or genetic heritage.
Living off the land on a full-time basis is extremely difficult in this day and age. Attempts by various authorities to introduce an alternative way of life have mostly failed and the Hadza continue in the manner of their ancestors, despite land encroachment and mounting pressure from surrounding communities.

The lands around salty Lake Eyasi in the Serengeti eco-system is where you will find the Hadza people. This area is located near Olduvai Gorge and Laetoli, which are both deeply significant archaeological sites in the Central Rift Valley for the study of early man and his origins. Pre-historic evidence indicates that hunter-gatherer communities have lived in this area for at least 50 000 years. It is likely these early people are the ancestors of the Hadzabe.

How do Hadzabe live:

The Hadzabe rely on free ranging game for hunting and the gathering of wild foods such as berries, honey and tubers. They source water from a few water holes and other natural means. The tribe consists of a number of bands that move around from place to place according to seasonal changes and the availability of food and water.

A camp can be set up and shelters built in just a few hours, likewise individuals can pack up their belongings and carry them on their backs when they need to move. Movement can also be dictated by disagreements in the camp, illness or death. There is no dominance in camp of one adult over another, everyone has the same status.

They hunt using bows and arrows, typically hunting baboons and other primates around. As well as the wild meat, the Hadzabe also survive on roots and tubers, and natural honey found in trees.

They have their own method of harvesting honey, using a variety of mushroom called a ‘puff ball’ mushroom which when burnt lets off a smoke that has sedative effect on the bees. 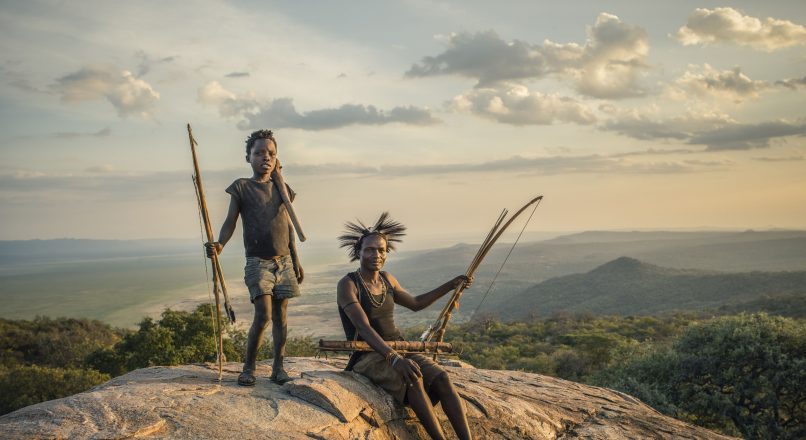 Spending time with the Hadza people is quite a culture shock. They don’t live by the same rules or follow time as we do. They have an oral tradition when it comes to remembering their past and do not use calendars, time, or counting past 3 or 4 as a form of measure. They have never experienced wars, famines or serious disease outbreaks and they have no carbon footprint.

They survive by their instincts and skills and their ability to interpret nature’s cycles and signs. They can walk confidently through the deepest bush at night and be completely at ease. They are the living reminders of how humanity is thought to have lived from as far back as 2 million years ago. The advent of farming in the outside world is a very recent blip on this timeline.

You can enjoy a truly fascinating visit with these gregarious people and experience life as a hunter-gatherer. On hunts with the Hadzabe you’ll see how they stalk their prey, using bows with arrows that are poison tipped, and how they interact with the Honeyguide bird to find a beehive. You’ll also learn how to forage for wild fruits and tubers as well as medicinal plants.
Everyone is relaxed around the campfire after stories and songs and on moonless nights they dance, there are no worries or thoughts about anything else except the present moment – they remain free and live well in the bounty of nature, what more could they want?